I started to work on Telomere Biology during my Diploma Thesis at the Heinrich Heine University Duesseldorf (Germany) in the lab of Prof. Dr. Chris Bridges. Here I measured telomere length of Blue Fin Tuna (Thunnus thynnus) and Swordfish (Xiphias gladius) using Telomere Restriction Fragment (TRF) analysis. Our main goal was to determine the biological age of caged tuna to choose the right fish for aquaculture reproduction.

As tuna telomere length did not correlate with the length of the fish, another age marker, I went to the IFREMER aquaculture station near Montpellier (France). Here I had access to European Sea Bass (Dicentrarchus labrax) of known age over a range of 8 years. Although Sea Bass telomere length also did not correlate with age, I found that variation within age-matched fish was lower than between age classes. Based on the fact, that rearing conditions in the hatchery were more likely to differ between age classes than within, we suggested, that telomere length may rather be a marker for individual life history traits, especially experienced stress, than for biological age. This theory has now been supported by studies in many different animals, including humans. 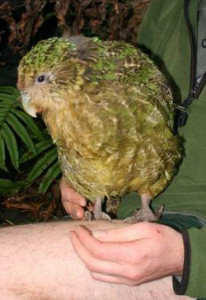 I then went on to do my PhD in New Zealand in the lab of Professor Dr. Neil Gemmell at the University of Canterbury in Christchurch. Here I worked on different NZ bird species, including the famous and highly endangered Kakapo (Strigops habroptilus). Again, the main focus was to find out if telomere length could be used to choose appropriate pairs for mating; however, this time for conserving the whole species and incorporating data on genetic diversity amongst the – at this time – 86 extant individuals. I found that telomeres were longer in male Kakapo and that telomere length was inherited maternally. This was exactly the opposite of what had been found in humans. However, as in birds the heterogametic sex is female, we suggested that sex-related telomere length differences and telomere length inheritance is associated with heterogamy. 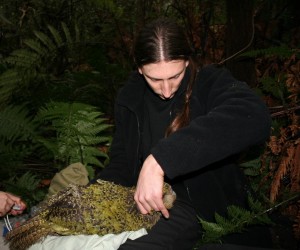